The rise of mandatory human rights due diligence 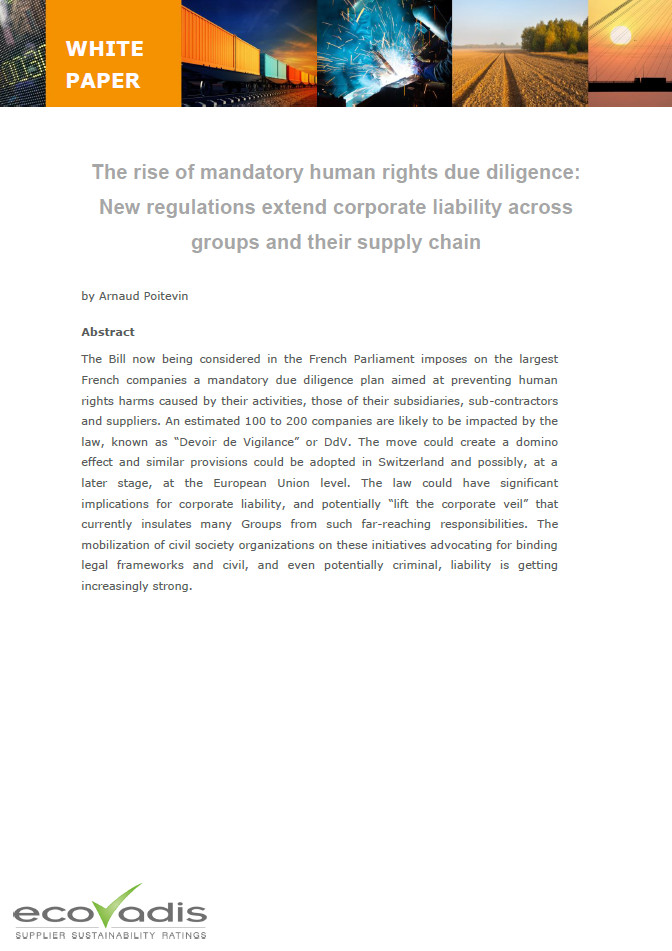 The  Bill  now  being  considered  in  the  French  Parliament  imposes  on  the  largest  French  companies  a  mandatory  due  diligence  plan  aimed  at  preventing  human  rights harms caused by their activities, those of their subsidiaries, sub -contractors  and suppliers. An estimated 100 to 200 companies are likely to be impacted by the  law,  known  as  “Devoir  de  Vigilance”  or  DdV.  The  move  could  create  a  domino effect  and  similar  provisions  could  be  adopted  in  Switzerland  and  possibly,  at  a  later  stage,  at  the  European  Union  level.  The  law  could  have  significant  implications  for  corporate  liability,  and  potentially  “lift  the  corporate  veil”  that  currently  insulates  many  Groups  from  such  far-reaching  responsibilities.

The  mobilization of civil society organizations on these initiatives advocating for binding  legal  frameworks  and  civil,  and  even  potentially  criminal,  liability  is  getting  increasingly strong. For  the  first  time,  following  the  move  initiated  by  the  inception  of  the  United  Nations  Guiding  Principles  on  Business  and  Human  Rights  (UNGP)  in  June  2011  and  the  2011  revision  of  the  Organisation  for  Economic  Cooperation  and  Development  (OECD)  Guidelines  for  Multinational  Enterprises,  a  State  has  proposed  a  piece  of  legislation  imposing  a mandatory due diligence plan on public  limited  companies and  their  supply  chain  addressing  human  rights  abuses.  So  far,  the  Bill  only  covers  French  corporations  with  five  thousand  or  more  employees (including within their French  subsidiaries),  or  10  thousand  or  more  (including  within  all  subsidiaries,  both  French  and  foreign).  Most  observers  estimate  the  number  of  companies  covered  by  the  law  between  150  and  200. A few of them could be subsidiaries  of foreign companies.  In  Switzerland,  a  motion  by  the  Swiss  lower  chamber  calling  for  a  law  imposing  a  duty  of  human  rights  due  diligence  (obligation  de  diligence)  on  Swiss  companies,  has  been  narrowly  rejected  in  March  2015. In  response,  civil  society  organizations  launched  a  popular  initiative  on  the  matter  in  April  2015  with  a  target  of  collection  of  100 000  signatures. The  initiative  could  then  lead  to  the  organisation  of  a  binding  referendum  to  amend  the  Swiss  constitution. Mandatory  due  diligence  regulations  are  under  consideration  in  Spain,  the  Netherlands  and  Sweden  for  public  companies. In  France,  it  is  expected that some additional provisions  on  business  and  human  rights  might  be  included  in  the  transposition  law  of  the  “Barnier”  Directive  2014/95/EU  on  disclosure  of  non-financial  and  diversity information  by  certain  large  undertakings and groups, at the latest in  December 2016. 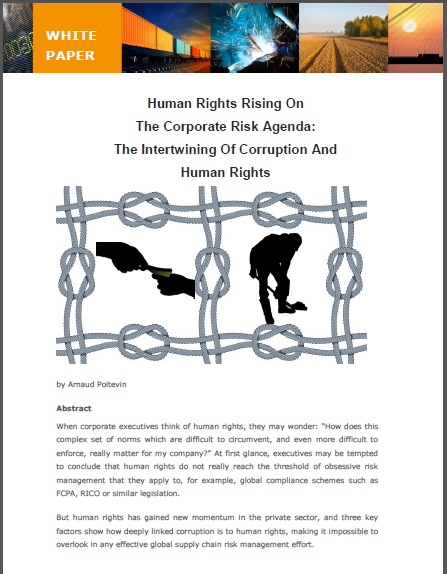 Human Rights Rising On The Corporate Risk Agenda: The Intertwining Of Corruption And Human Rights

Скачать
← Back to library
﻿